To: All those who love our flag

I just wanted to tell everyone about an event that seems small, insignificant, even routine but to some of us veterans, police officers, firefighters, medics, and yes security officers sometimes it still brings a sense of pride, the lump in the throat, and in some cases maybe a tear or two.

My post is at the 37th Street Water Treatment Plant, Norfolk. I have an 8’ x 10’ guard shack at the west vehicle gate and handles access control. Between the vehicle gate and the guard shack is a flag pole. One day I took a good look at the American flag flying over the entrance of the facility and could not help but notice that it was turning brown from exposure to the elements and the rear edge of the flag was slightly torn and frayed.

As I looked at the flag, I thought to myself that’s my country’s flag a symbol many of us had fought for and many had died for and should not look in such a condition. Besides that, it was the first thing people approaching the gate saw and if their heart was in the right place would like to see her fly with bright stars and bars, crisp and snapping in the wind.

On Tuesday, 21 April, Mr. Dave Heath, the Chief Water Treatment Officer for the plant stopped by the guard shack just to chat. He always makes a walking tour of the plant checking different things every shift he works. He also makes it a point to come by and say hello. On this day I could not keep it to myself about the condition of the flag and shared my feelings about it. Mr. Heath didn’t hesitate for a second and said “I will order you a new one”. Well, we all know how sometimes these kinds of statements get lost in the day to day operations, placed on a pile on the desk, or just forgotten. I kind of put it out of my mind about a new flag and figured I would get one myself somehow, some way.

I have come to know “Dave” who works in the plant control room and monitors everything that occurs on the plant. He and other employees have really made me feel like a member of this tight knit group of workers.

On Tuesday, 27 April, four business days later, a brand new American flag was delivered to the guard shack by John Phelps one of the maintenance employees. This is remarkable considering it went through the city process of acquiring items. The current flag was a 3’x 5’ flag and when I removed the new flag from its plastic rapper I found that the new one was a 5’ x 8’ flag.

I immediately started to lower the current flag when John said “be careful now, don’t let it touch the ground”. So with great care I lowered it and gave it to John. John told me that it was going to a Boy Scout group for proper disposal. With Johns help I snapped the new flag to the rings on the rope and raised it to the top of the pole. As soon as it was tied off suddenly like a sign of approval from heaven above a strong gust of wind caused the flag to stretch out its full length and wave so gently. What a proud moment it was for me and how thankful I was to be an American.

As I began to go back to my duties, one of the construction workers came walking by and as he passed by me he looked up at the flag, pointed to it and said ”Those colors don’t run” and continued to walk. I knew then I was not the only one that noticed her flying so magnificently.

I thought to myself how quickly the new flag came. How serious Dave was when he said very quietly “I will order you a new one”. It just reinforced my positive opinion of the character of the people in supervisor, management positions and all the employees in general. I feel very fortunate to be assigned to this post. This is a situation where the “client” creates a working environment that is a positive experience to work in. My thanks to Dave Heath, Gerry Julian, Gilbert Martinez, and many others that contributes to a great work environment.

Our new flag is like a beacon that reminds us every day, “Land of the free, and home of the brave”. 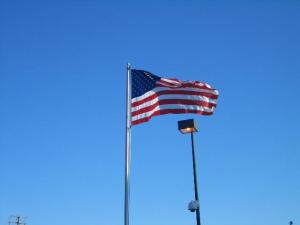